The cruise ship Orient Queen (ex Med Queen), which was to be chartered by Alteza Cruises today suffered considerable damage in the explosion that affected the port of Beirut. 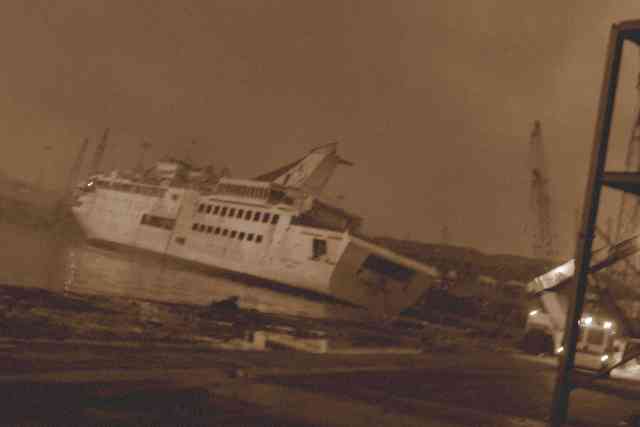 Beirut, Lebanon.- A strong explosion with an epicenter in the port of Beirut shook the entire Lebanese capital on Tuesday, leaving almost a hundred dead, more than 5,000 wounded and material damage of hundreds of millions of dollars.
The Lebanese authorities point out that the magnitude of what happened may be due to a large number of explosives deposited for six years in a warehouse in the port.
The company Abou Merhi Cruises, owner of the Orient Queen, a ship known in South America as Med Queen and which was the first vessel to present the now-defunct Alteza Cruises, as a ship that would operate in Argentina, Uruguay and Brazil, which has its home port in Beirut suffered extensive damage to the boat.

The damage from the Beirut Port explosion today was so enormous that initial reports suggested they were multiple explosions spread out over a large geographical area across the city. pic.twitter.com/UwbkWXbN4g

At the port, Vincenzo Orlandini, a 69-year-old Genoese sailor, COO of Abou Merhi Cruises, who was at the time of the explosion aboard the Orient Queen along with other crew members, told reporters:

“I heard the explosion and flew to the opposite side of the lobby. I landed on the carpet and I’m lucky, I think that saved me. The boat is totally destroyed: the cabins, the saloon, everything,” said the veteran sailor.

No communication has yet been obtained from the company, but due to the disaster, it is normal for communications to take time to reestablish themselves.
The Cruise Ship
The Orient Queen was built in the late 1980s, in the Levante Naval Union, Valencia, Spain. Its original cost was US $ 45 million, and it was delivered to its owner in September 1989.
Its dimensions are:
Gross Registration Tonnage: 7,478 gt.
Length: 120.80 m
Width: 16.82 m
Covers for passengers: 6
Capacity (in low beds): 299 guests
Crew: 114
Space index: 70 m³ / pax
Service rate: 2.62 pax / trip